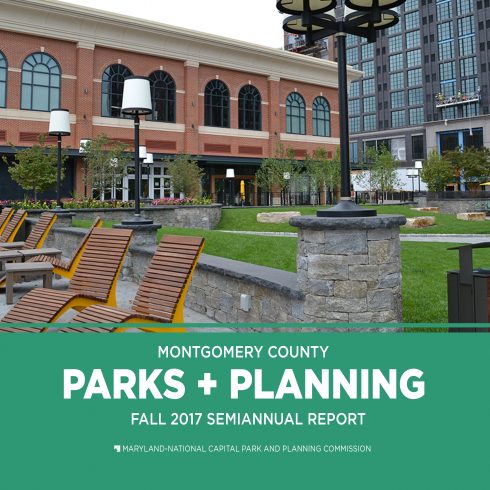 Report highlights plans and projects completed over past six months, emphasizing progress of visions being realized

SILVER SPRING, MD – Montgomery Parks and the Montgomery Planning Department, part of the Maryland-National Capital Park and Planning Commission, presented their Fall 2017 Semiannual Report to the Montgomery County Council on Tuesday, October 3, 2017. The report, available online, showcases key projects, park activities and plans from the past six months, and work that will be completed over the next six months and beyond.

“We set out to achieve ambitious goals,” noted Anderson. “With careful planning and policies, we have been able to save resources, establish active parks and expand our transportation network with safer places for biking and walking. This success will continue in the future as we build on our past efforts to be economically competitive.”

Planning Director Gwen Wright reinforced this message, pointing to the newly proposed Marriott headquarters in Bethesda, Purple Line stations, phase two of Pike and Rose, and the third phase of the United Therapeutics campus as the latest manifestations of planning goals being realized. She explained the three themes of the semiannual report – New Suburbanism, Engaging Communities and Strengthening Economic Competitiveness – as key to managing county growth.

Wright highlighted the work undertaken by the Planning Department’s Research and Special Projects Division, including studies devoted to rental housing and retail and employment trends, as important to future planning efforts. She noted the Master Plan Reality Check, a study of outcomes from three past plans, as key to understanding how plan goals are realized or not.

“Our approach to planning is based on research and data,” said Planning Director Gwen Wright. “Taking a closer look at past plans, housing, retail and jobs can show us how to envision smarter growth more effectively.”

In explaining recent plans and programs, Director of Montgomery Parks Mike Riley pointed to how the vision of parks in every neighborhood can be attained through careful planning.

“Our new Energized Public Spaces Functional Master Plan, recently approved by the Planning Board, is a blueprint for vibrant parks in dense areas where green spaces are thought to be impossible to achieve,” said Riley. “This plan demonstrates the importance of parks in the most urban neighborhoods.”

The Fall 2017 Semiannual Report highlights the following accomplishments, achieved by the Planning Department over the past six months:

The Fall 2017 Semiannual Report highlights the following accomplishments, achieved by the Department of Parks over the past six months: